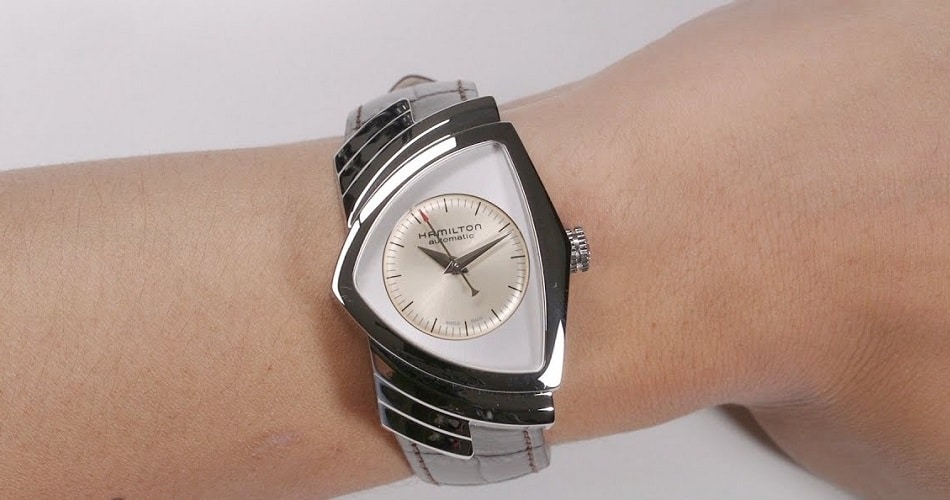 Hamilton is one of the watch brands that have made its mark in the watch industry. In this review, you will read about the watches’ collections under the brand and how the brand came into being.

Hamilton is not a big name when it comes to luxury watches, but any fashion expert or watch enthusiasts cannot claim not to have heard the name before. From the busy American railroads to Hollywood movies’ exciting scenes, this watch brand has been there and done it. And it’s not stopping anytime soon.

This article is a review of the Hamilton watch brand. We will discuss the brand’s origin, watches under the brand and their features, and many other topics relating to the brand.

Hamilton is a watch brand that any fashionista would like. From vintage collections to newer models, you will find timepieces that match your taste, regardless of your taste. You will also find Hamilton watches that fits your budget as its timepieces start from $300 up to $6000. In all, Hamilton is a brand that has come to stay.

Trending
Modern Home Design Ideas You Should Try This Year

The History of Hamilton Watches

The Hamilton watch brand started in 1892 in the American town of Lancaster, Pennsylvania. The circumstance surrounding its establishment is a funny one, as it acquired a watch company, Keystone Standard Watch Company, which went bankrupt at the time. During the acquisition, the brand acquired a 13-acre landed property of the Keystone Standard Watch company. This was where initial production started. 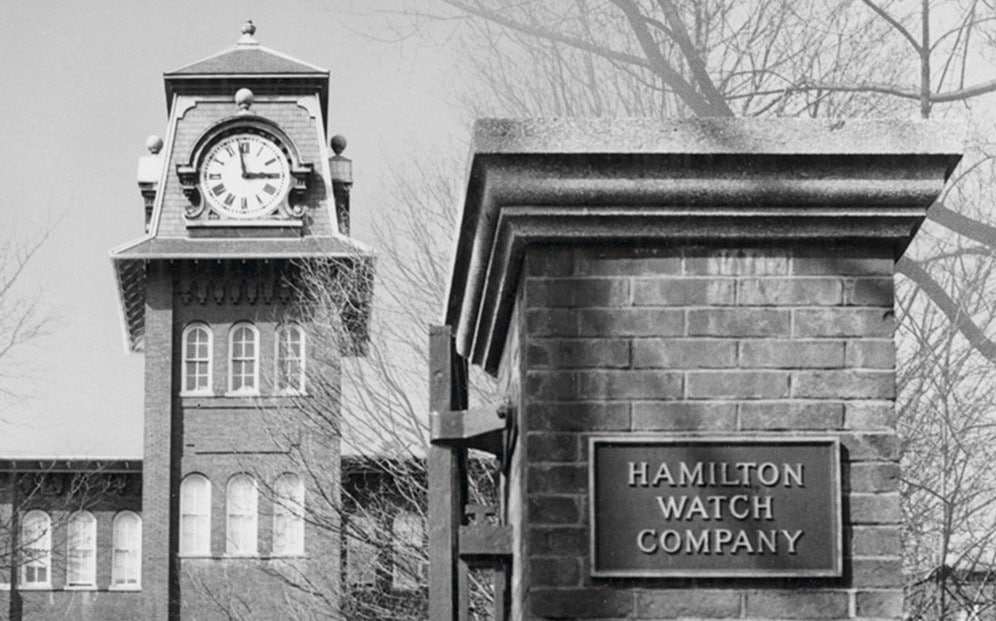 But when another watch company, Aurora Watch Company of Illinois filed for bankruptcy in the same year, guess who acquired the company through a merger. You guessed right, Hamilton. So with this acquisition, the brand became a bigger brand, poised to take the watch industry by storm.

It is important to state here that Hamilton wasn’t the company’s name originally. The name was supposed to be Columbian, but another watch company had already trademarked the name; hence stakeholders had to find another name.

The name ‘Hamilton’ came as a tribute to the founder of Lancaster town, Andrew Hamilton, a lawyer from Scotland. Also, he formerly owned the area where the company was situated, so it made sense to name the brand after him and his son, James Hamilton, who was alive at the time.

When the Hamilton brand started producing watches, its target audience was not the common people. Its major market was the railroads and its personnel. The company started by making watches for railroads. 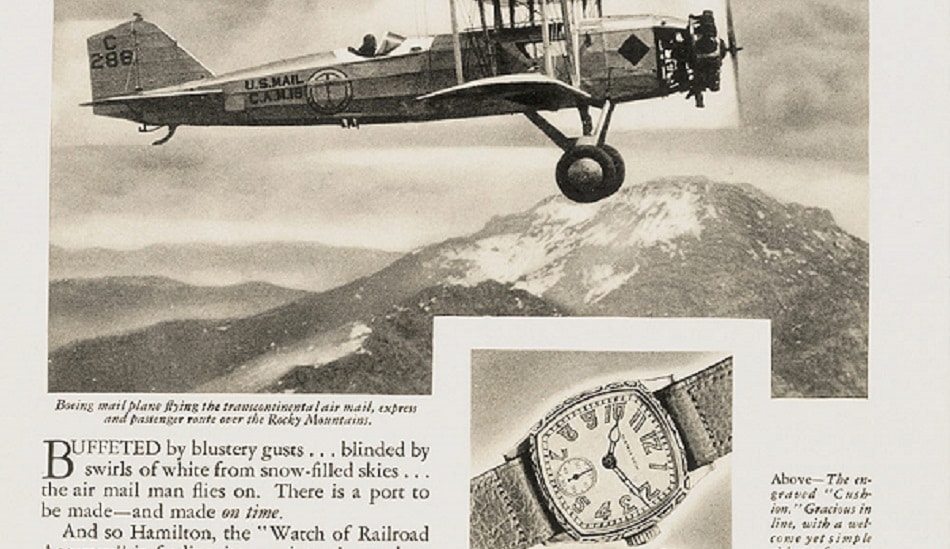 This was possible because Hamilton’s railroad watches were accurate and durable. In no time, it became the household name in the railroad watch industry.

Banking on this success, the company decided to make a series of pocket watches for railroad named the Broadway Limited. This series came out and was well received by the market. It even got the nickname, The Watch of Railroad Accuracy.

While enjoying the success, the brand branched into making wristwatches in 1917. The need for wristwatches increased as the preparation for the First World War began. Hamilton got the commission to make wristwatches for the US Armed Forces at the time.

Surprisingly, Hamilton managed the transition from pocket watches to wristwatches very well and made the perfect watches for the servicemen going to war. This further increased the popularity of the brand.

Still reeling from that endeavour’s success, the company switched to making watches for the aviation sector. In 1918, the band broke into the aviation watch market and registered an impressive success in the sector.

The first official east-west coast flight also has a Hamilton watch as the timekeeper. And most importantly, the first flight from California to Hawaii in 1927 had pilots wearing the Hamilton Precision watches. The accuracy of the watches was crucial to the success of the flight as a few degrees of inaccuracy would have led the pilots to miss the islands of Hawaii.

The success of the Hawaii flights reinstated Hamilton’s name as the go-to brand for accuracy and precision. So by the 1930s, about four major commercial airlines in the US commissioned Hamilton as their official watch.

After the aviation success, the brand ventured into making watches for movie stars in Hollywood (more about that later) and then proceeded into making electric watches. In fact, the brand was the first to make an electrical watch in conjunction with legendary industrial designer, Richard Arbib.

He designed the first electrical battery-operated watch at the behest of Hamilton, and Hamilton manufactured and released the watch in 1957. The watch, named Ventura, also made waves with the King of Rock n Roll, Elvis Presley wore it in his musical ‘Blue Hawaii’.

After Ventura’s success, Hamilton made Pulsar, which was the world’s first digital electronic watch. Pulsar was a limited edition in a smart business move as only 400 pieces were made, each going for as much as $2100.

Finally, the popular Swiss brand, Swatch acquired Hamilton watches in 1976 and led the renaissance of Hamilton’s old designs. After many years, the company’s head office and manufacturing plant were relocated to Biel in Switzerland, giving the brand a much needed Swiss label.

Hamilton watches are of impeccable and impressive quality. While the brand is not a popular one among luxury watches, fashion experts and watch collectors have nothing but good reviews to give about the watch; especially with regards to its quality. 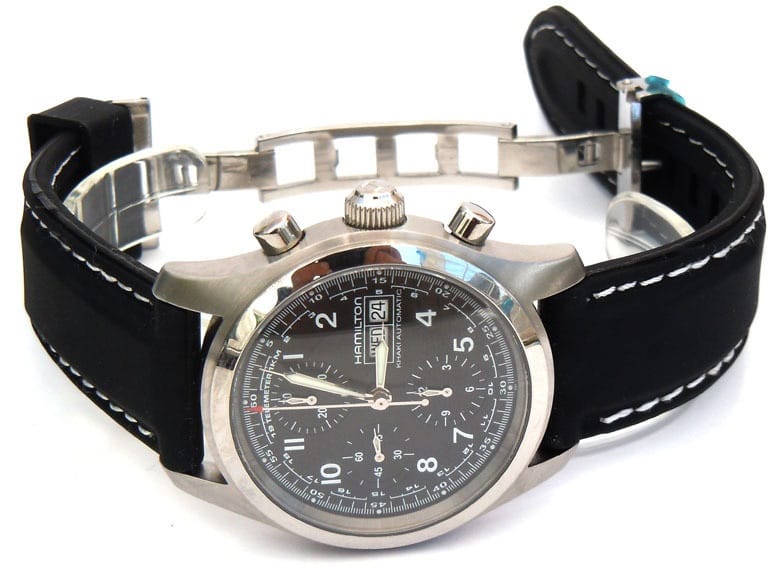 Due to the express attention given to details, Hamilton Watches gets compared to good Swiss brands such as Glycine and Tissot, and sometimes, Omega Watches. Yes, Hamilton watches are that good.

Therefore, among watches in the mid-price range, Hamilton Watches is one of the top names. It is affordable and uses quality materials against the inexpensive Japanese quartz that most brands within its category use.

The exploits of Hamilton watches in the Hollywood movie industry is an important part of its history. It all started in 1932 when a movie titled Shanghai Express featured two Hamilton timepieces, the Flintridge and the Boulton. The movie highlighted the watches’ usefulness, and this serves as a publicity stunt for Hamilton watches. 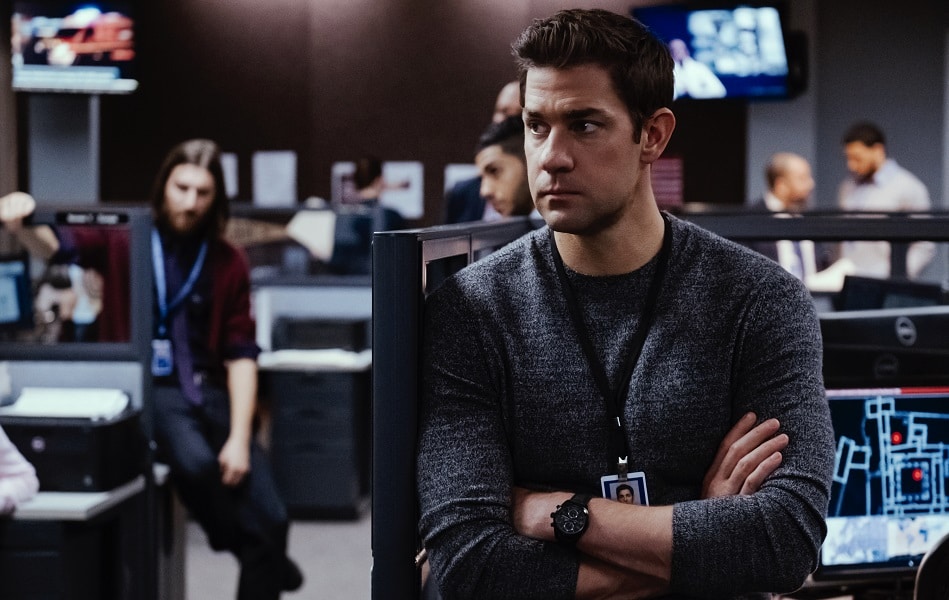 The next movie that featured Hamilton watches as The Frogmen, a movie released in 1951. In this movie, Hamilton unveiled its new military designs, and the movie showed the accuracy and expertise with which Hamilton designed the watches. It got all better when the movie got nominated for two Oscars and Hamilton’s reputation soared along with the movie’s.

In 1957, Hamilton released the first electric watch, Ventura; the world got to know about when Elvis Presley used it in his movie Blue Hawaii.

After Ventura and Altair’s success, a movie director, Stanley Kubrick, approached Hamilton to design watches for his upcoming movie, 2001: A Space of Odyssey. Hamilton accepted the offer and produced watches that went on to become synonymous with the movie.

There seemed to be a break from the movie scene until 2014 when the futuristic movie, Interstellar, came out. The lead actor in the movie wore a Hamilton watch on his wrist. The following year, 2015, a space movie directed by Scott Ridley, The Martian, also featured another Hamilton watch; this time, a Khaki BelowZero.

In total, Hamilton Watches appeared in over 450 movies over the years and was used by popular actors such as Liam Nesson and many others.

Despite its status in the industry, Hamilton has a strong historical heritage, and this translated to a solid reputation within the watch industry. Its designs and movement mechanisms dated as far back as the 1920s, 1930s and 1940s. While the brand was still under American ownership, it used in-house American movement mechanisms. However, with its Swatch acquisition, it now uses Swiss ETA automatic movements. 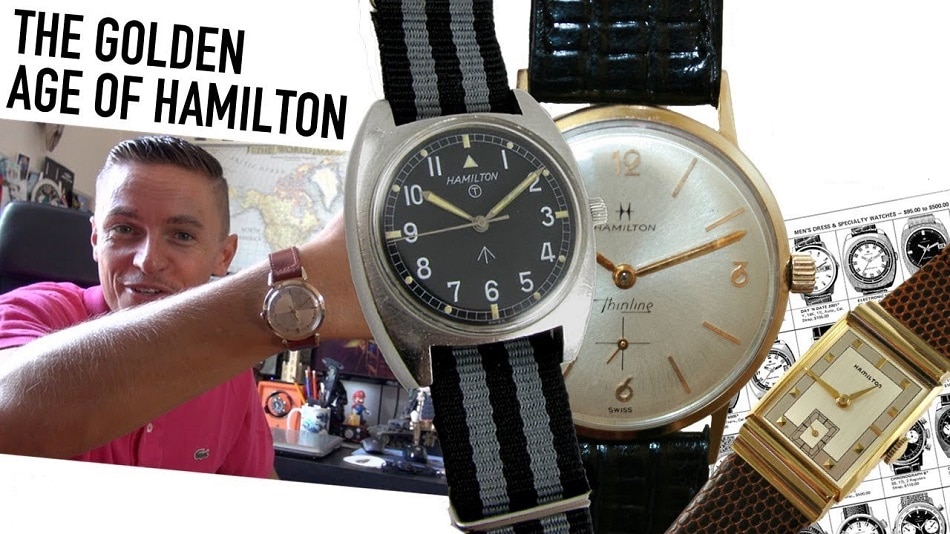 Despite this impressive reputation within the watch industry, Hamilton watches do not appreciate over time. This is because they are not luxury timepieces such as Rolex, Omega and the likes. Nonetheless, the brand made the top ten Swiss watch brands that reshaped the industry alongside brands such as Omega, Rolex, TAG Heuer and Longines.

Hamilton follows the watch industry’s tradition of providing a maximum of two years warranty on its timepieces. The warranty policy is effective from the date of purchase and covers all material and manufacturing defects noticed at the time of the watch’s delivery. 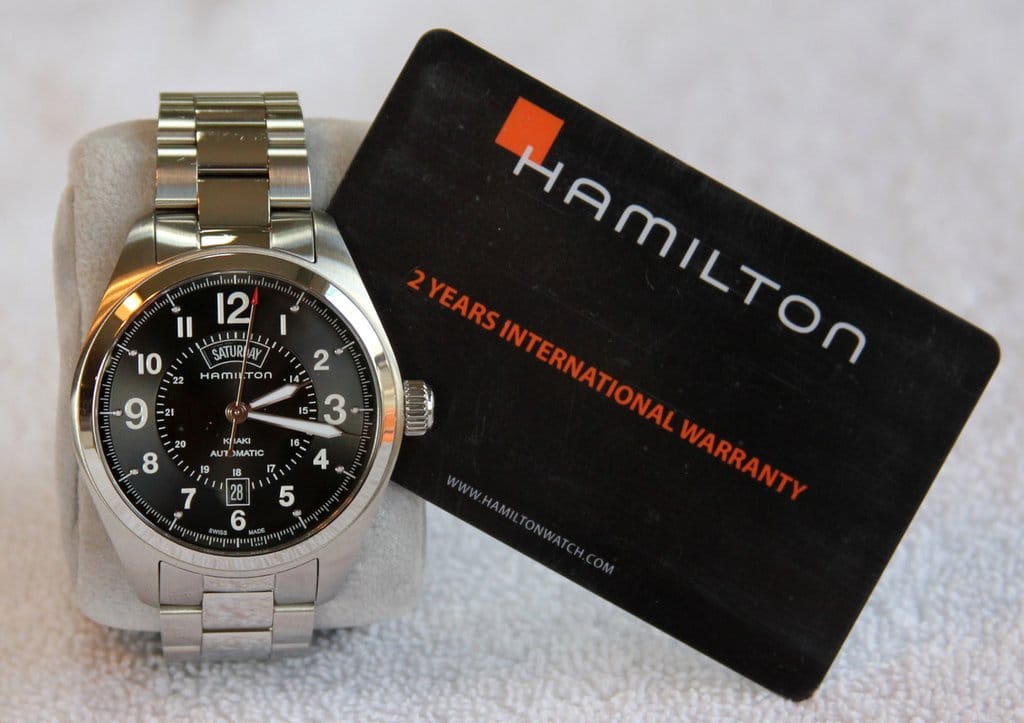 The warranty policy doesn’t cover the watch battery’s life, tear and wear from prolonged use and mishandling by unauthorised persons.

Ventura is one of Hamilton timepieces with which the brand gained worldwide acclaim. The watch was used in Elvis Presley’s Blue Hawaii movie. The Rock n Roll icon used the timepiece because it resonated with his personality.

Rightly so, because the watch features a classic 1980 triangular design. While the original design is somewhat small by today’s standard, the watch’s size has been increased to about 42.5mm.

The watch also had styled and shielded lugs, which serves as a guard for the watch’s strap.

The dial of the Ventura timepiece has a matte black color and an interesting design like the case. The watch’s centre part is well finished, and the surrounding edges feature a rigid chapter ring design. The hands of the watch have Super LumiNova insets. Finally, the watch uses the H-10 automatic movement against the quartz movement used by the original Ventura model.

The watch is for fashionistas and lovers of classic timepieces. The design and features of the watch is an embodiment of classy and exotic fashion taste.

The Hamilton Pilot series is another collection of watches that speaks to Hamilton’s ability to design beautiful and functional timepieces. Starting from the watch’s dial, you would appreciate that Hamilton included a large and easy to read watch face on the timepiece. The dial embodies the pilot design and the hour markers and hands do complements and highlights the watch face.

The watch also features a 42mm stainless steel case and a watch band lug measuring 20mm. This impressive design is completed by using an ETA- 2834-2 movement for the watch. Alongside a 40-hour power reserve, you can be sure of a long-lasting timepiece in your hands.

This watch is for people who appreciate aviation watch design and are willing to have a taste of it. 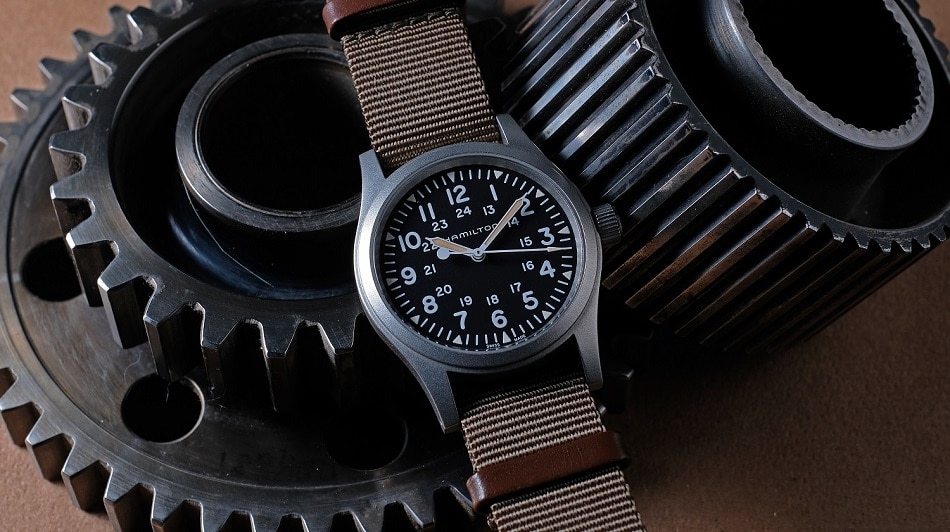 The Hamilton Mechanical Watch is under the Khaki Field series. The watch reflects the military watch design that the brand is popularly known for. As a matter of fact, this watch is inspired by the design of the hamilton watches made for the first world war servicemen with little changes and modification to the design. However, there is a little surprise; the timepiece uses 38mm stainless steel.

If you appreciate the military watch design, this watch is for you. 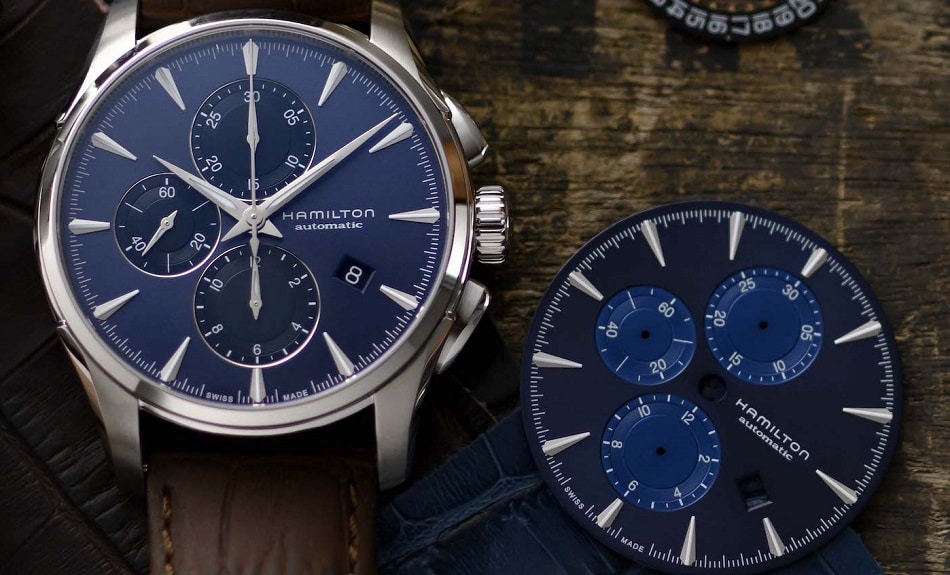 Costing almost $1000, one would expect the Jazzmaster Automatic to be a top-quality timepiece, and fortunately, the timepiece doesn’t disappoint. It features a beautiful design and impressive functionality to rank as one of Hamilton’s best timepieces.

The watch is perfect for men who want to stand out fashionably. The watch is somewhat expensive, but worth every dollar spent on its acquisition.

Are Hamilton Watches Worth the Price?

Hamilton watches combine impressive designs, features and functionalities. The timepiece is worth every dollar.

Hamilton is not a luxury or premium brand. But this doesn’t take anything away from its historical relevance and the quality of its timepieces. Watch collectors and fashion experts have had only good reviews about the watch brand.