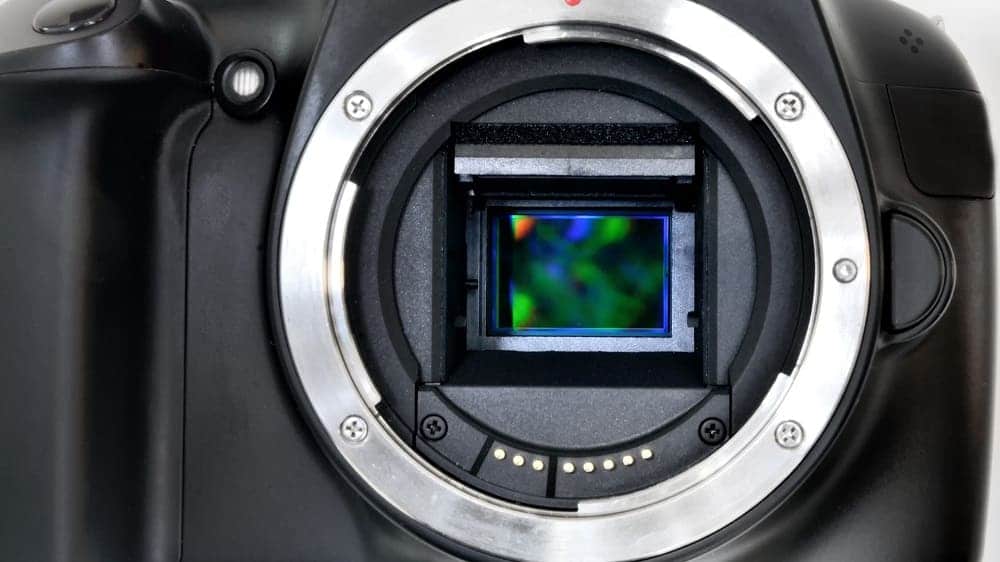 We take a detailed look at the different camera sensor sizes, their advantages and disadvantages.

The digital sensor lies at the heart of a digital camera. It is what completes the otherwise shell of magnesium alloy, plastics and metal. Without the sensor everything else is just a meaningless assortment of technology & craftsmanship.

The digital sensor has replaced film in the last two decades to become the dominant imaging medium. So much so that the world over film manufacturing and processing labs are shutting down like the domino effect. Very recently the world’s oldest running film processing lab – Bourne & Shephard shut down.

What makes the digital sensor the most important piece of technology inside a digital camera? Well to be honest, the sensor, together with the image processing engine and the storage medium is what constitutes the primary ‘digital’ aspects in a digital SLR. Film cameras are comparatively a lot simpler, which is why manufacturers could splurge on the aspects that ensure a high degree of perfection in the mechanical aspects of the camera. Things have changed in the last few decades. People now want instant gratification just like instant food. Film is no longer sought after by consumers.

The prime reason for the prohibitive cost of digital cameras was that the sensor was extremely expensive to produce. The larger the sensor size the pricier it got. But things have changed quite dramatically over the last couple of decades. Industrial large scale production has brought down the cost of manufacturing these sensors, enabling larger sensor sizes to be more cost-effectively manufactured. But still today, larger the sensor are more expensive than their smaller counterparts. 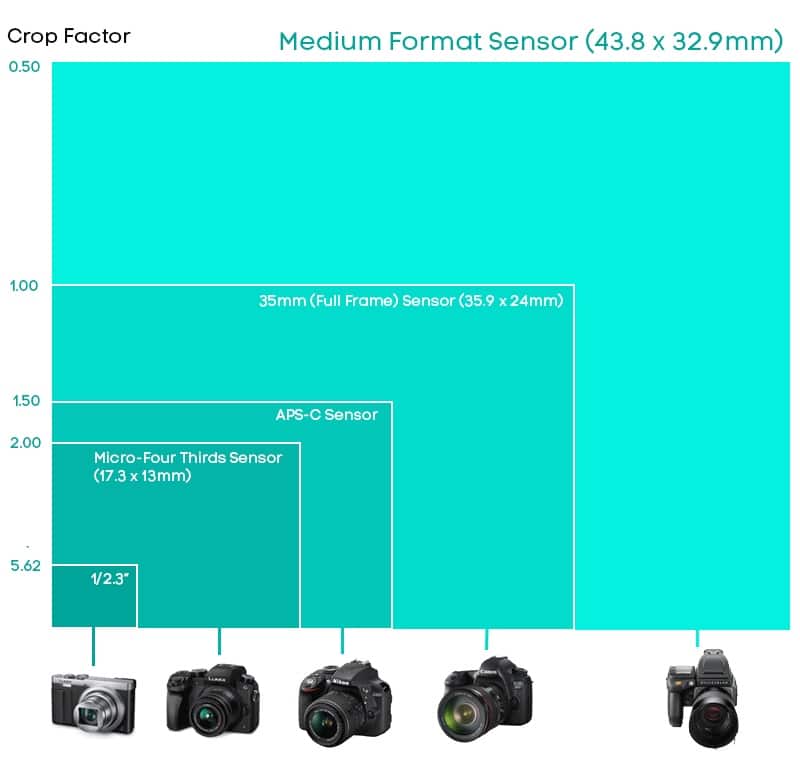 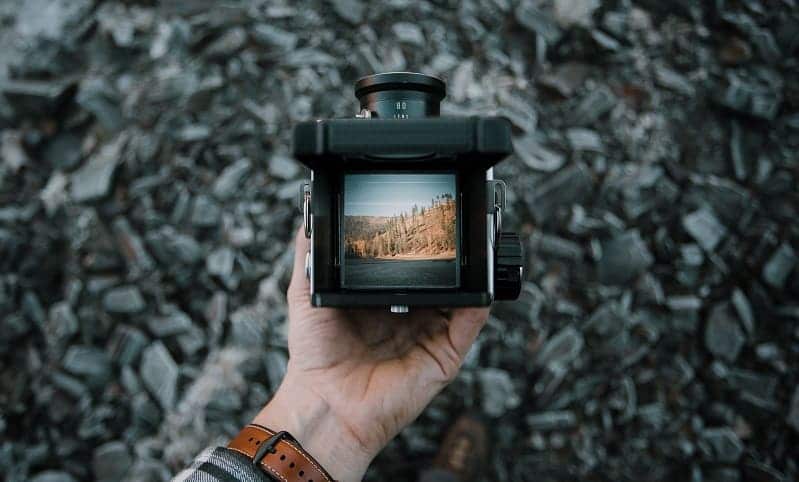 We start off with medium format sensors. This is the largest commercially available sensor size in the market. Cameras such as the Hasselblad H6D-50c or the newly launched Hasselblad X1D-50c mirrorless all use a sensor size of 43.8 x 32.9mm. This 50 megapixel sensor produces frames the size of 8272 x 6000 pixels. Larger sensors are more expensive to produce but they are also more sought after because of their better light gathering area, more control over the background blur and suppressed noise. Medium format sensors can produce extreme shallow depth of field, especially when shooting with very wide aperture lenses.

Full-frame denotes a sensor size that mimics the size of 35mm film. The actual sensor size is 36 x 24mm. Let’s take an example. The D610 is a typical full-frame DSLR camera. The sensor inside the camera measures 35.9 x 24mm. This large (when compared with APS-C sensors) sensor is big enough to capture a lot of light and consequently they produce cleaner images even when shooting in low light conditions. In addition to that, full-frame sensors produce a shallower depth of field just like medium format cameras do.

APS-C, or the more popularly termed crop sensor is actually a sensor that is smaller than the full-frame sensor above. The term ‘crop sensor’ isn’t technically a prerogative of the APS-C sensor size, however, somehow, a majority of the times when crop sensor is referred to that is exactly what is meant by APS-C size. 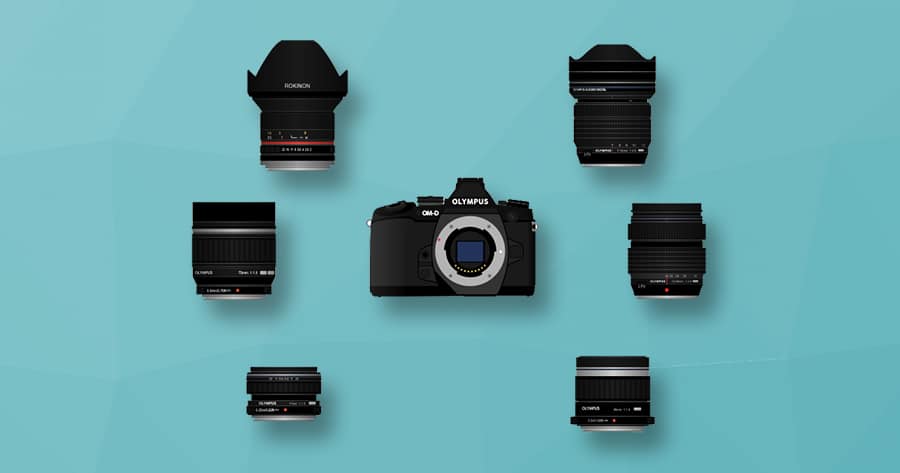 Micro four-thirds is a sensor size that is currently being used by Panasonic and Fujifilm to produce mirrorless interchangeable lens cameras. The extremely popular Panasonic GH4 is a camera that uses this sensor size. The size of the sensor is 17.3mm x 13mm (approx.). The crop factor (we’ll learn about crop factor in a short while) of micro four-thirds systems is 2x.

This is the smallest sensor size that is currently being used in digital cameras. Sensors that are smaller than 1/2.3” are used in popular smartphones. The 1/2.3” CMOS sensor, often with resolution of 10 megapixels and above, has poor low light performance. Additionally, there is not much room to play around with the depth of field of your images. The small sensor coupled with the fixed aperture on the lens of these cameras produce a big depth of field.

There are certain aspects about sensor sizes that you ought to know. When resolution increases, in other words the megapixel count increases, the individual pixel size of the sensor goes down. It results in loss of effectiveness as a light gathering tool. It is in situations like this that noise starts to impact the quality of your images.

If you see cameras like the Nikon D4, a full-frame DSLR with a sensor size of 36 x 24mm and a megapixel count of only 20, the individual sensor sizes are large. This is why the frames are pretty noiseless. However, overall small resolution results in small image sizes. The individual frame size is only 4928 x 3280. That’s smaller than the image sizes produced by even some of the mid-range crop sensor cameras. 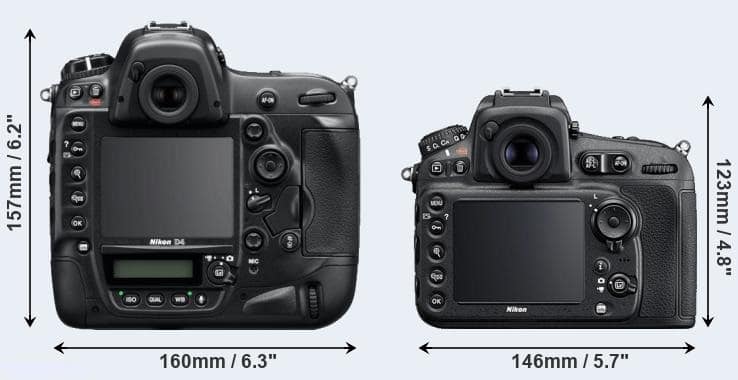 Thus, if you need large prints the D4 is not your camera. You need something like the Nikon D810 that combines a large full frame sensor with a lot of pixels. Something like the recently launched 50 megapixel Hasselblad X1D-50c is a fantastic choice in that sense.

You will hear the term ‘crop factor’ quite a lot. This term is related with the field of view of a lens relative to what a 35mm sensor sees.

A 35mm sensor (and film before that) is considered as a standard. The view you see through a lens that has an image circle that is optimized for the 36 x 24mm sensor size, is considered as a ‘35mm format view’. This is not standard angle of view and this has nothing to do with standard lenses or any such thing. Those are different things.

To understand Crop factor we need to go back to the paragraphs where we discussed each sensor size. If you remember, a full-frame sensor is of size 36 x 24mm. An APS-C sensor on the other hand is roughly 24 x 16mm. As already explained different camera systems have different APS-C sizes. 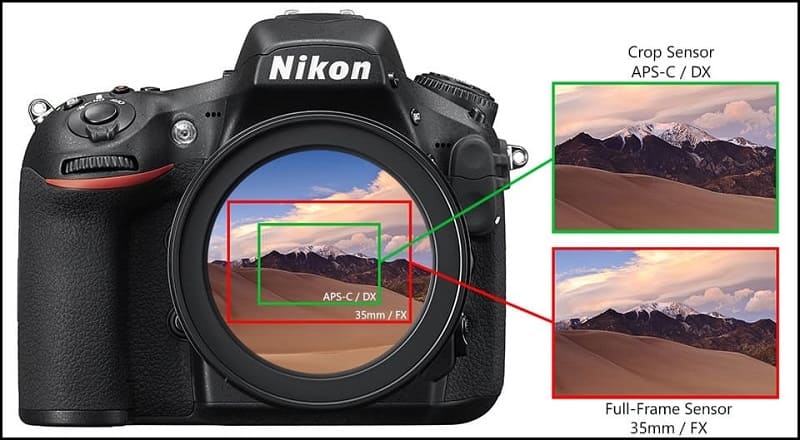 When you see through the viewfinder of an APS-C camera the field of view captured by the lens appears smaller. This is not a fault of the lens itself but the sensor. The size of the sensor being small it captures only the middle portion of the image coming through the lens ‘cropping out’ the rest. Thus, it appears that the image is slightly zoomed in. In other words it appears as if the focal length of the lens is slightly zoomed in.

Sensor Size and Depth of Field

The larger the sensor, the shallower the depth of field of your images and vice versa. Let’s look at this phenomenon and try to understand why this happens. Let’s say you are shooting with two different cameras – one a full-frame / 35mm DSLR and the other an APS-C DSLR. You mount the exact same lens, a 50mm prime. The conditions between the two shots remain the same so there is no change in exposure value. All other conditions also remain the same.

When you compare the shots the one with the full-frame sensor would have a larger coverage of the scene compared to the one that uses an APS-C sensor. You know why that happens. In order to replicate the same composition as the full-frame camera you will need to take a few steps back with the APS-C camera. Accordingly, you push the entire scene back. When you do that, even if you don’t change the exposure values and keep focusing on the same spot as earlier, your depth of field will become larger as the subject to lens distance becomes larger.

That brings us to the last point to discuss and that is whether sensor size or focal length alone controls depth of field.

This is why it is almost impossible to replicate the same background blur as a 50mm f/1.8 lens on a full-frame camera using your trusty iPhone. There are charts available online which can accurately give you the depth of field you can expect when shooting with a specific sensor – lens combination.

Use these to better control your photography. Happy clicking!