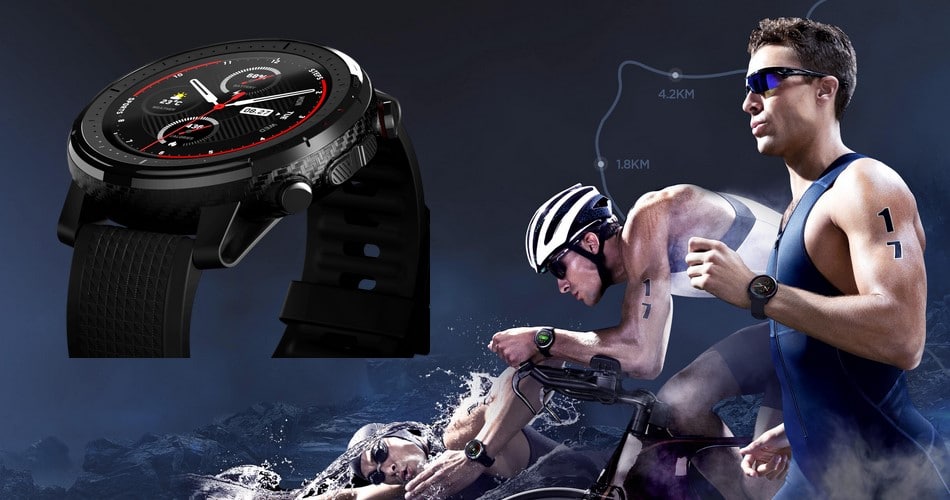 Huami recently released the Amazfit Stratos 3. Read along to see how it fares among the other Amazfit series.

Huami is one of the budding names in the smartwatch and tech wearables industry. After producing smartwatches such as the Amazfit Bip S and Amazfit T-Rex, the company decided to release the latest of its Amazfit models, the Amazfit Stratos 3. 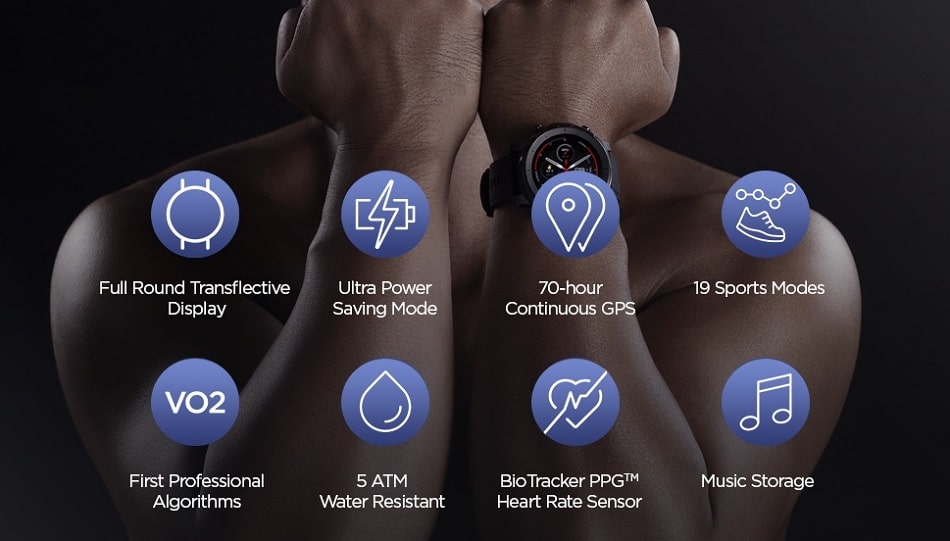 This smartwatch seems like a consolidation of its predecessor and possesses some impressive and exciting features.

In this review, we will discuss some of the features of the Amazfit Stratos 3. We will also examine how to use these features and the possible drawbacks associated with using the smartwatch.

The Amazfit Stratos 3 is an obvious upgrade from the other smartwatches produced by Huami. This upgrade is evident in terms of design, functionality, and construction. There are also new features that you may not find on the Amazfit Stratos 3's predecessors.

Trending
Modern Home Design Ideas You Should Try This Year

With these new features, the Amazfit Stratos 3 is a worthy contender with popular industry brands such as Garmin, Samsung, and many more. 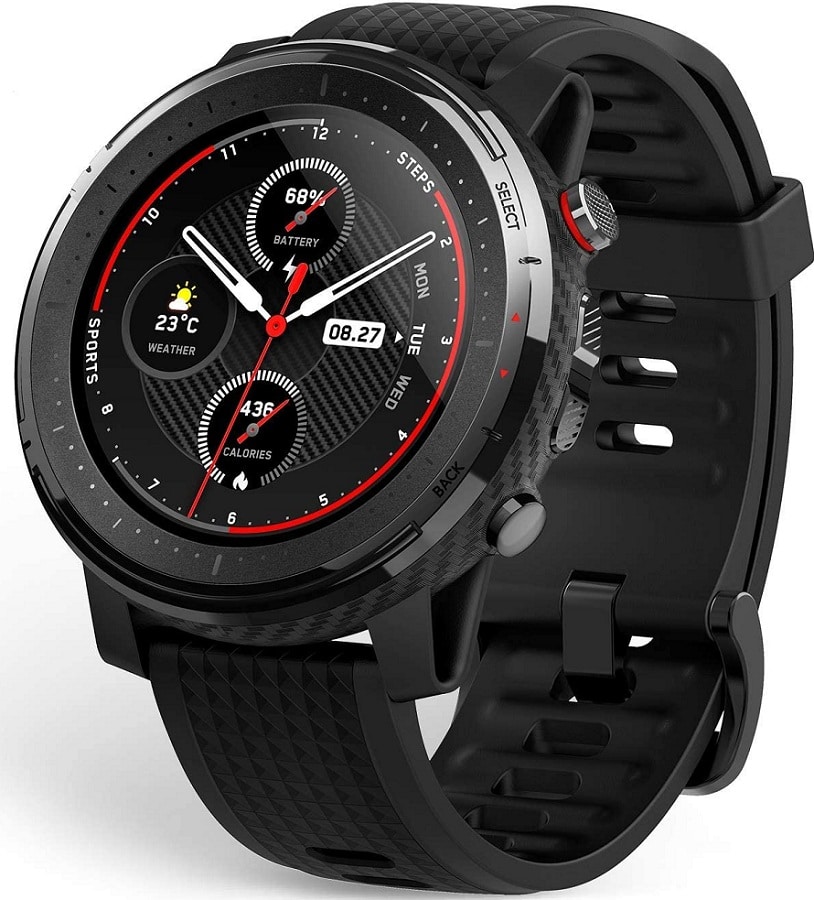 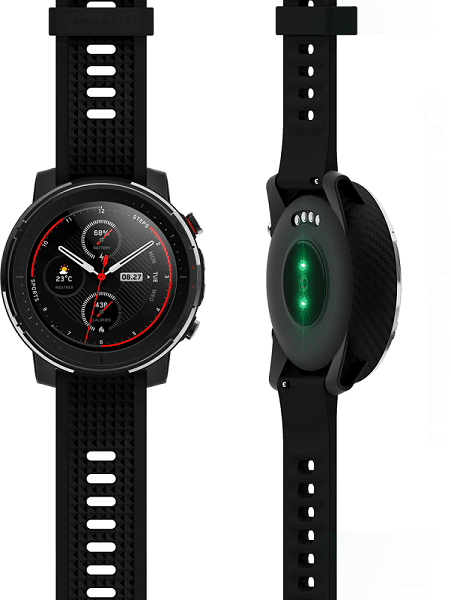 However, the display design of the smartwatch is the main evidence of its outdoor use. Huami is reputable for making excellent smartwatch display screens. Amazfit Bip S, one of the Amazfit Stratos 3 predecessors, has one of the best display screens in the industry at the moment. However, with the Amazfit Stratos 3, Huami goes an extra mile by adding a MIP transflective screen to the smartwatch.

A transflective MIP (memory in pixel) screen is an LCD screen with an optical layer embedded on top. The LCD feature and the optical layer allow the display screen to transmit and reflect light.

As a result of this feature, the screen becomes brighter as more light falls on it. This makes the outdoor viewing of the Amazfit Stratos 3 impressive as you will be able to see the content of the display screen clearly, even under direct sunlight.

Away from the innovative screen display feature, there is a 1.34-inch screen with a resolution of 360 by 360 pixels. This display screen uses Gorilla Corning glass for protection and doesn't come with an auto-brightness feature. The absence of the auto-brightness feature is understandable as the optical layer, and LCD feature suffices for all the brightness control you may need. 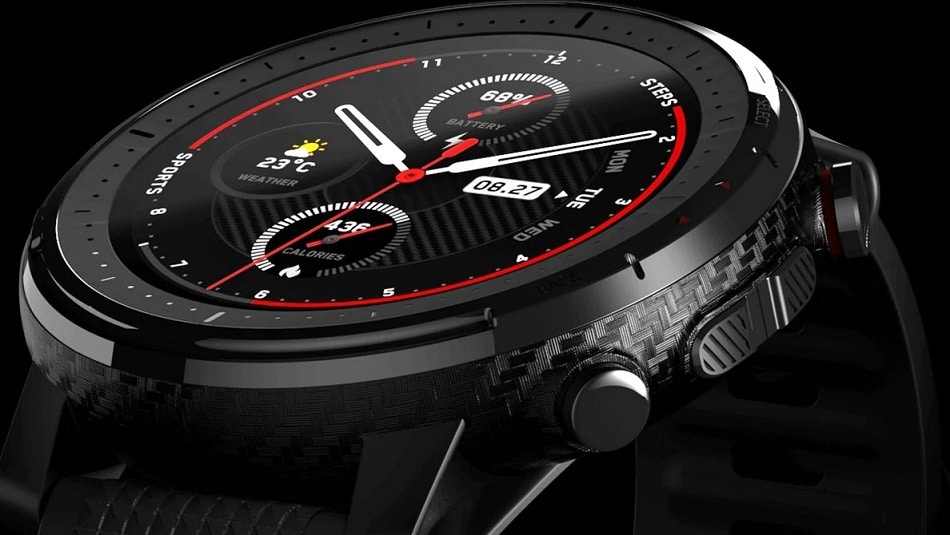 Therefore, there are two push buttons tagged ‘Select' and ‘Back.' These buttons are for selecting an option or menu and backtracking to a previous page or screen. In between these two buttons, there are two rotating buttons for scrolling vertically on the smartwatch. With these button layouts, you need not touch the screen of the Amazfit Stratos 3.

The case of the Amazfit Stratos 3 measures 48mm in diameter and 13.4mm thick. This means that it sits comfortably and prominently on the wrist. While this sounds like a big watch, it fits perfectly on a medium-sized wrist.

Talking about its materials, the case of the Amazfit Stratos 3 is made from stainless steel and plastic. The bottom case is plastic, while the other parts of the case are stainless steel. Its bezel is also made from zirconia ceramic. The smartwatch's strap is made from silicone and measures 22mm in length. It is overly comfortable on the wrist, and you can swap the strap for other options. 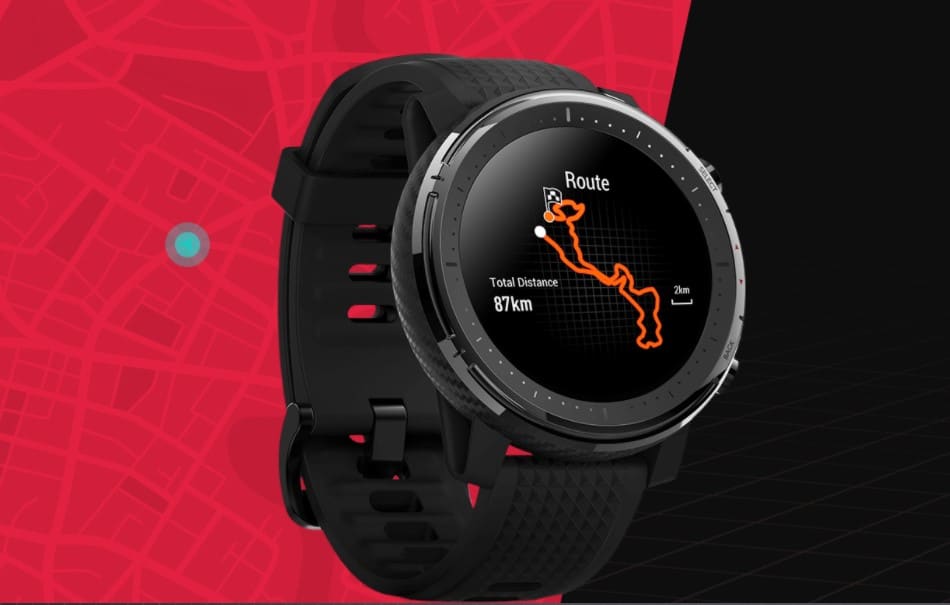 There are also multiple sports modes on the smartwatch. This mode/feature allows you to track the duration and other data from many sporting activities. As an upgrade from its predecessors, Huami added 19 sporting activities to this smartwatch against the 11 than most of the other smartwatches from the company. Some of these activities include treadmill, running, walking, jump rope, hiking, open water swimming, tennis, triathlon, and many others.

The smartwatch doesn't only track these activities; it provides accurate and rich analytics during and after the activities. Amazfit Stratos 3 also uses the Firstbeat algorithm to provide data peculiar to specific sports. These data will help you understand your current fitness level and map out strategies to attain your fitness goals. 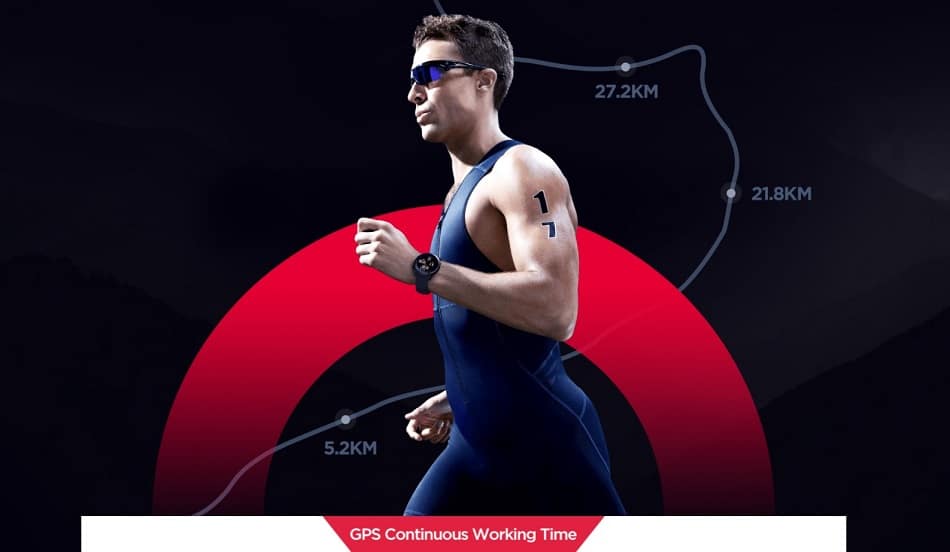 Another functional feature of the smartwatch is the heart rate monitor, also known as BioTracker. The tracker is an in-house sensor that Huami products use to monitor and track the heartbeat rate. This feature comes with preference settings, one of which is supposed to alert you in case of irregular or high heartbeat rate.

Apart from the activity and sports tracking features, other smart features are embedded in the Amazfit Stratos 3. These features include a standalone music player, notifications, and water resistance.

The smartwatch's standalone music player is enabled by a whopping 4GB storage space, which allows it to store many songs. You can play these songs during your workout sessions using a Bluetooth speaker or headset, as the Amazfit Stratos 3 doesn't come with a speaker or a microphone.

To consolidate its swimming tracking activities, the Amazfit Stratos 3 is water-resistant to about 50 meters deep. This means that you can have an awesome time swimming with your smartwatch on your wrist without having to worry about water damaging the smartwatch.

You can even link the GPS feature with the swimming tracker to know the pool's precise location. This linkup can also help you get and analyze advanced swimming data such as SWOLF, Swimming pace, and many more. 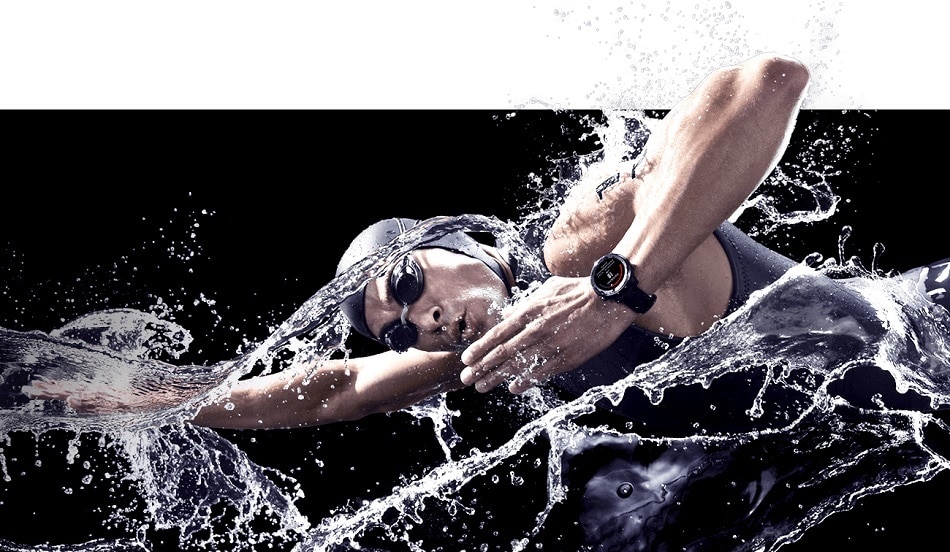 The notification feature of the Amazfit Stratos 3 allows it to connect with and receive alerts and notifications from some applications on your phone. These notifications include calls, text messages, and social media notifications. As said earlier, the smartwatch doesn't come with a speaker or a microphone, so you cannot reply to many of the notifications, especially calls.

The Amazfit Stratos 3 comes with a 4GB storage space. As you cannot make calls or reply to texts, music files, and songs are the likely things you would need to save on the smartwatch's storage. You can also store the data from your GPS tracking on the storage, but this is negligible as it does not occupy much space.

App Connectivity (include setup and updates)

The app works for both Android and iOS devices. This means that regardless of the smartphone you use, you can use the smartwatch and connect it with the app for more functionalities. However, your Android device must use an OS with at least an Android 5.0 version or higher. For iOS devices, you need 10.0 or above.

The process of connecting the app to the smartwatch is a bit problematic. This has been a regular problem with Amazfit smartwatches, and the Amazfit Stratos 3 didn't have additional features to solve this problem.

You may need to update the smartwatch before connecting it to the app. This is not a problem as the Amazfit Stratos 3′ WIFI feature connects automatically to pull the necessary updates from the internet.

However, setting up the WIFI for connecting to the app is the problem and takes numerous retries to eventually set it up. Updating the app and the smartwatch takes a long time (about an hour) before you can start using the smartwatch. 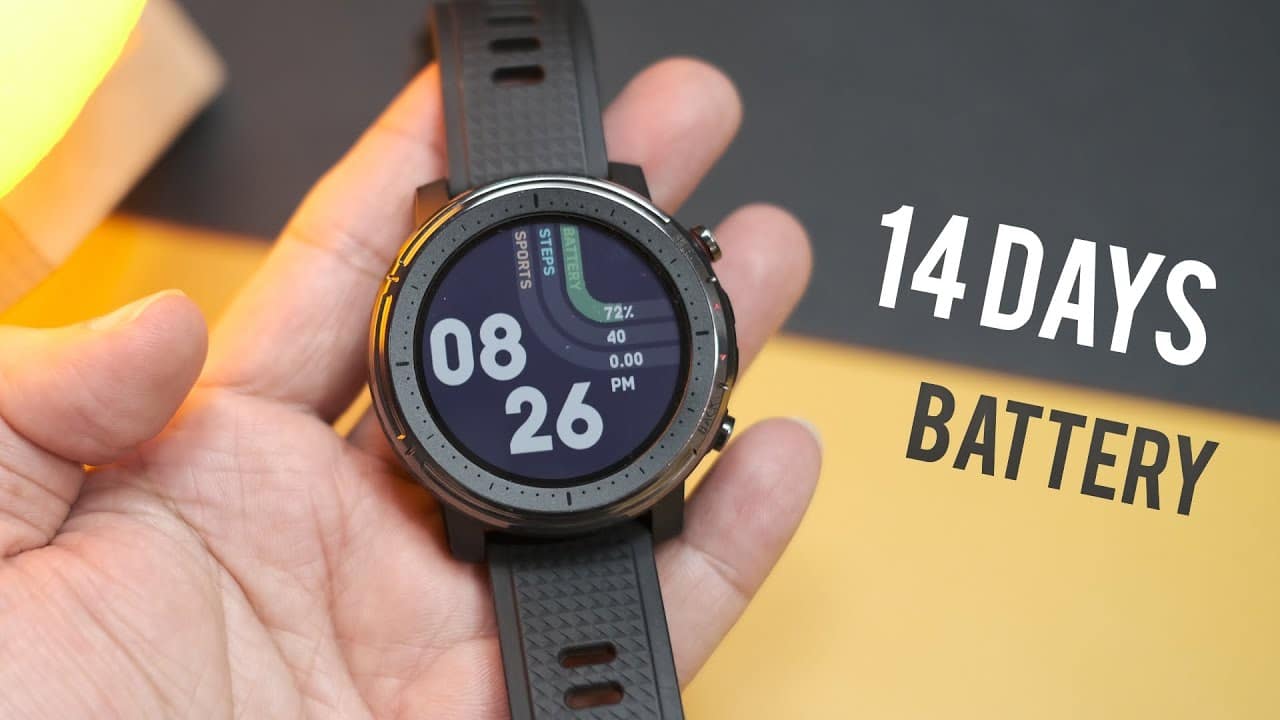 The average use includes GPS and activity tracking feature, notifications, decent brightness level, and heart rate monitor every day. There is an Ultra-Endurance battery mode where the battery would last for a whooping 14-day period.

This mode, however, is a tradeoff between battery efficiency and some important UI and functionality features. Under this model, you won't be able to use the WIFI, nor will you be able to use more than 12 sport modes.

To charge the Amazfit Stratos 3, the smartwatch comes with a 4-pin pogo charger whose port can be found at the watch's base. The charging duration is impressive as it charges 30% under 30 minutes. In all, a full charge takes about two hours. 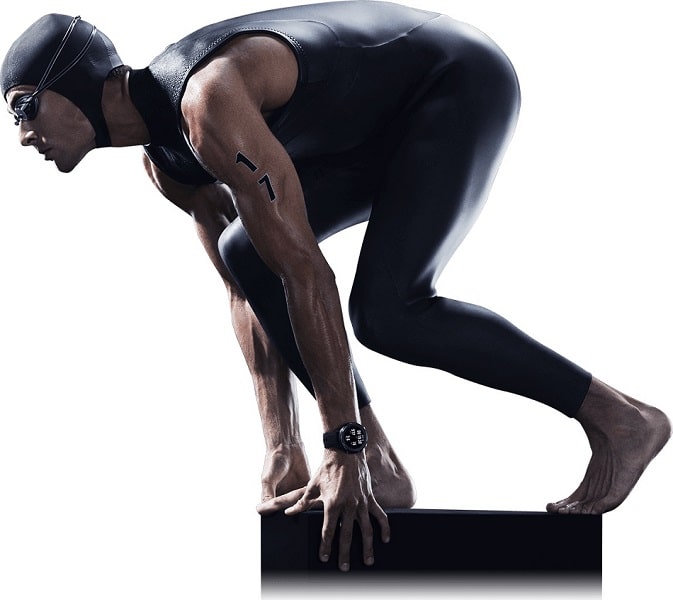 If you are a sportsperson/athlete or you are a sucker for functional smartwatches, the Amazfit Stratos 3 is for you. It features all the necessary sports, fitness, activities, and even smart features you can ever wish for. However, you should pay a considerable amount of money as it is the most expensive of the Amazfit series.

Two major competitions can stand side by side with the Amazfit Stratos 3. These are the Garmin Vivoactive 3 and the Amazfit T-Rex Smartwatch. 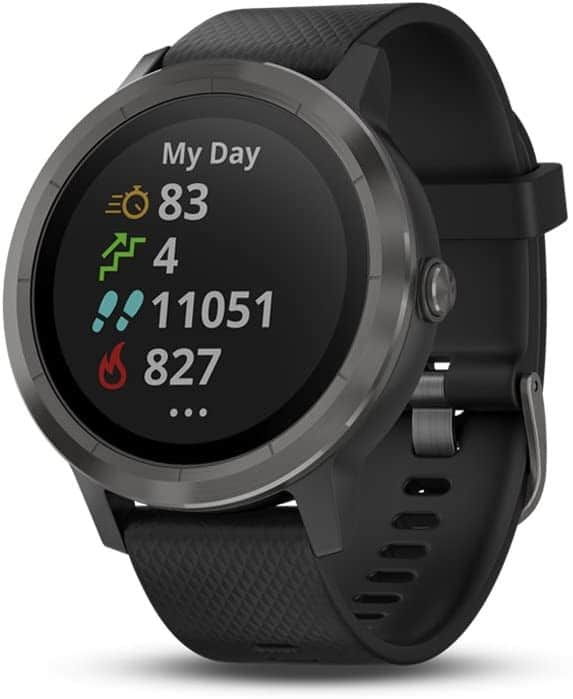 This smartwatch encompasses many notable and impressive features that allow it to stand as a worthy alternative to the Amazfit Stratos 3. The Garmin Vivoactive 3 features superlative fitness and sports activities tracking. Being a fitness watch, its superior activity tracking features are not surprising.

It also has an NFC contactless payment feature, a feature absent in the Amazfit Stratos 3. 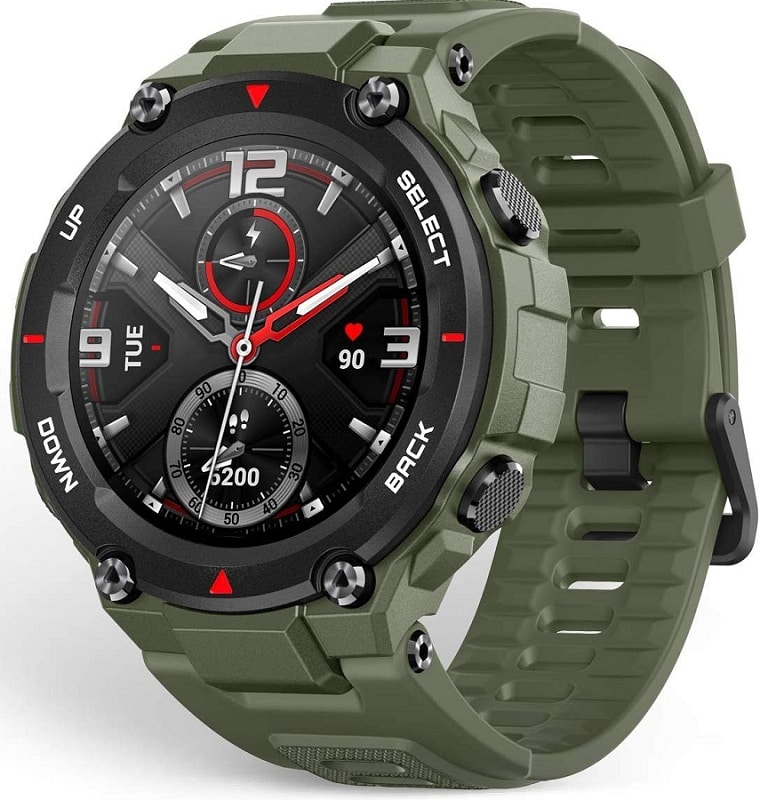 This is another watch from the Amazfit series. This smartwatch features a rugged design and a stronger battery life (20 days) than the Amazfit Stratos 3. Also, it uses an AMOLED screen display instead of the MIP LCD used by Stratos 3.

The Amazfit Stratos 3 is a very good smartwatch watch with impressive designs and functions. Although it has its inadequacies, especially regarding app connectivity, it still ranks as one of the best products from Huami.